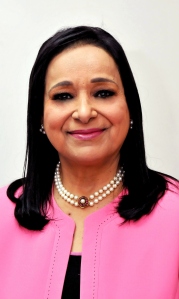 Executive Director of Sir “Magdi Yacoub Foundation” holds a bachelor’s degree in Economics & Political Science. She started her career as a diplomat with the Egyptian Ministry of Foreign Affairs followed by the Council of Arab Economic Unity, League of Arab States. Hassouna moved then to the banking sector where she held the position of Assistant General Manager of “Misr Iran Development Bank” and later Director General of “Egypt’s International Economic Forum”.

Hassouna who writes regularly on public affairs, was the first woman to be elected on the Board of the Egyptian Council for Foreign Affairs where she held the position of Secretary General and currently she is Treasurer. She is a member of the Executive Council of the “Pugwash Conferences on Science and World Affairs” and sits on IDEA International Advisory Group for West Asia & North Africa (WANA). She is a member of both the Consultative Boards of the “Arab Thought Foundation”, Beirut, Lebanon and the “Arab Forum for Alternatives” Cairo, Egypt.

Named on the list of the “World’s 100 Most Powerful Arab Women” for 2014 by Arabian Business & CEO magazine. She is the Founder & Chairperson of  “Enlightened Egypt Foundation” which promotes the values of citizenship and gender equality, a founding member of the “Think Tank for Arab Women”, the “Forum for Arab Citizenship in Transition Democracies“, the “Front  for Protecting the Freedom of Creativity & Expression” and the “Arab International Women’s Forum” in London, UK

A contributor to the book “In the Wake of the Arab Spring – Conflict and Cooperation in the Middle East”, Sverre Lodgaard (Editor), publisher Scandinavian Academic Press, Norway, September 2013