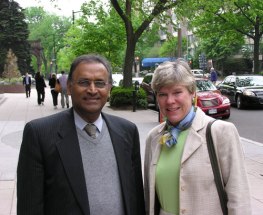 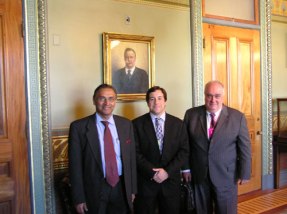 Jayantha Dhanapala and Paolo Cotta-Ramusino with Jon Wolfsthal in the office of Vice-President Joseph Biden, April 27, 2009, discussing CTBT ratification and other topics

Paolo Cotta-Ramusino and Gary Samore, WMD Coordinator in the White House, May 14, 2009

As President of the 1995 Nobel Peace Prize-winning Pugwash Conferences on Science and World Affairs, and as a former Head of delegation to the Geneva-based Conference on Disarmament and  UN Under-Secretary-General for Disarmament Affairs, I am delighted that this sole multilateral negotiating body adopted a programme of work on Friday May 29.

This breaks a stalemate of a decade which reflected a lack of political will rather than any institutional deficiency. Now the CD can do what it was always intended to do – negotiate multilateral disarmament agreements beginning with a Fissile Material Cut-off Treaty,

All delegations must be congratulated on this consensus which will hopefully extend throughout the negotiating process.I look forward to further agreements being negotiated on all other items of the CD agenda leading to a world free of weapons of mass destruction and the regulation of conventional weapons to their lowest possible limits